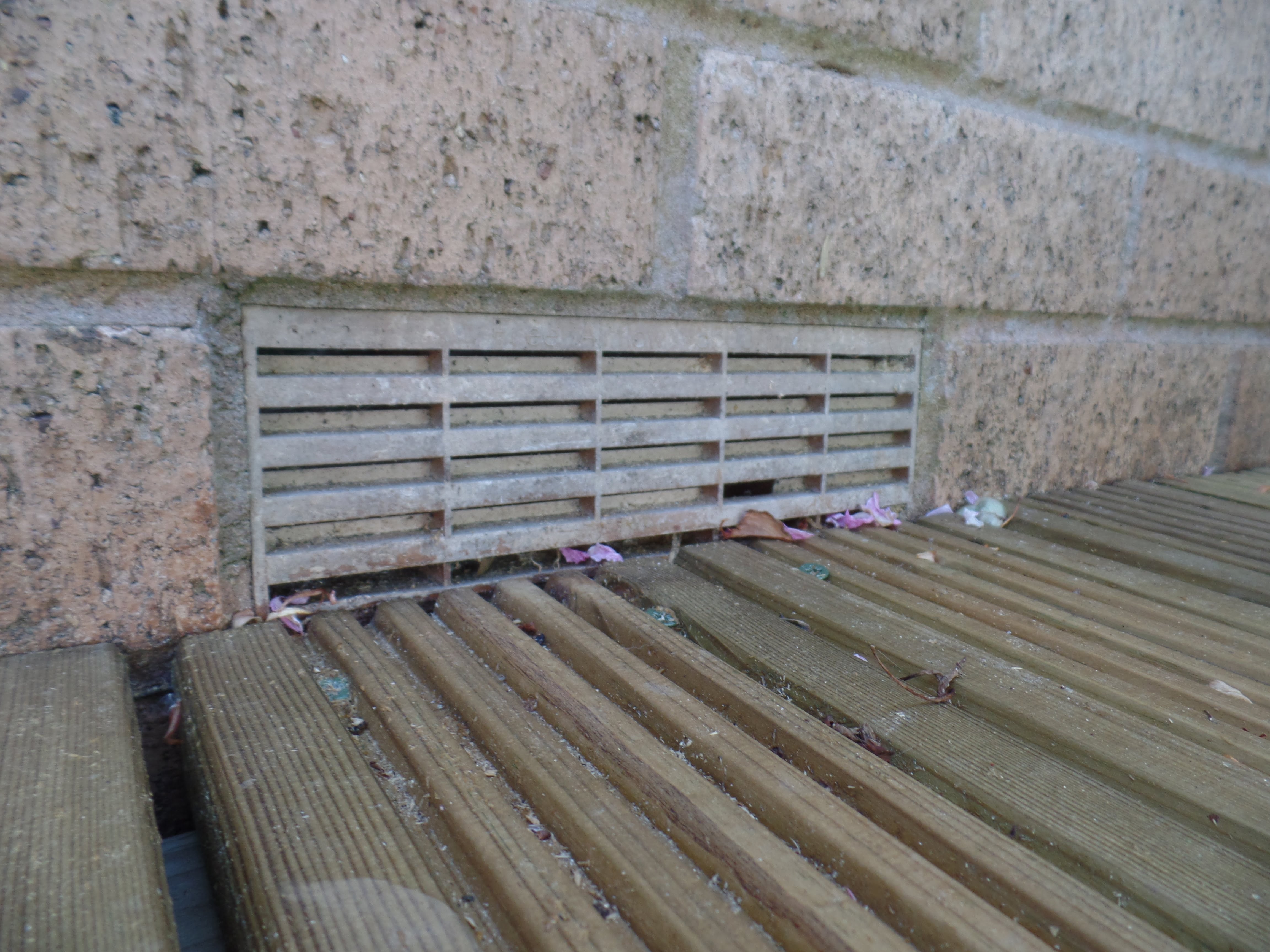 Older properties with suspended timber floors are prone to dampness in the space beneath, in the sub floor void. This may be caused by condensation or by rising damp or by penetrating damp. It is likely to cause rot, decay and timber beetle infestation (woodworm  or worse).

Airbricks are essential to permitting air to flow beneath the floors. This reduces the condensationin the sub floor void. It removes excess moisture and helps the timbers to remain drier – hopefully dry enough to prevent that rot, decay and timber beetle infestation.  These seemingly insignificant objects are often overlooked but their role  isvital in keeping the ground floor timbers floors in acceptable condition.

What may be the consequences?

Sadly,landscaping gardens is one of the major causes of blocking airbricks. For example, the grilles may be covered by wall plates for decking or in some cases simply heaped with gravel. Building pathology is not a widely appreciated topic in all trades! Recently, we visited a property in Bedminster on behalf of an insurer where decking had been installed to the rear and caused a significant dry rot outbreak.  Unfortunately for the policy holder, this would not be an insurable peril and she will have to fund the cost of treatment and repair as well as replacing most of her stripped wooden floor.

The Victorians used a cast iron grille with vertical vents, as shown on the below diagram.  These have rarely been cleaned and over the years become blocked by spiders and general detritus. Often they have been painted so many times that the width of the grilles is reduced. This in turn will impair their ability to allow air to pass under the building. Hence it is important to scrape off the excess paint (wearing  gloves as the paint was often lead containing) and repaint  them.  Pipe-cleaners are useful to help clear the slots. 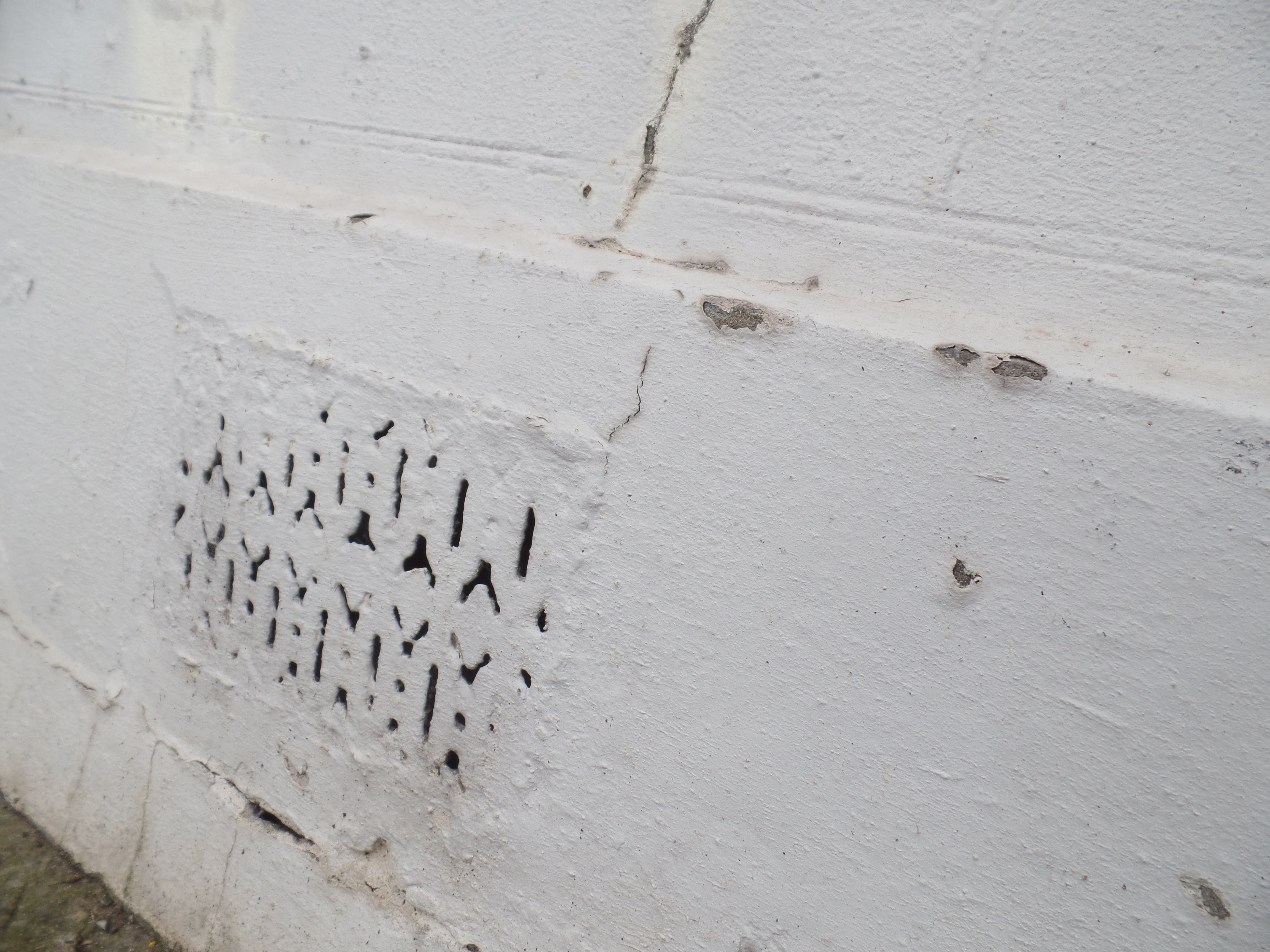 At this time, the metal grilles were often  constructed in a grid pattern as shown below. Again, they suffer from the same issues as mentioned above; they require clearing out and generally maintaining. If they rust they will expand, which can cause localised cracking to the surrounding brickwork – the force is sufficient to push this out of alignment.

On a building survey in St George recently, we inspected a house that appeared to be completely Victorian, however the airbricks were clearly 1930’s and were not replacements.  We followed the trail and discovered that the house was rebuilt the late 1940’s,having been destroyed by bombing in the war. The smallest clues can help identify issues such as this! 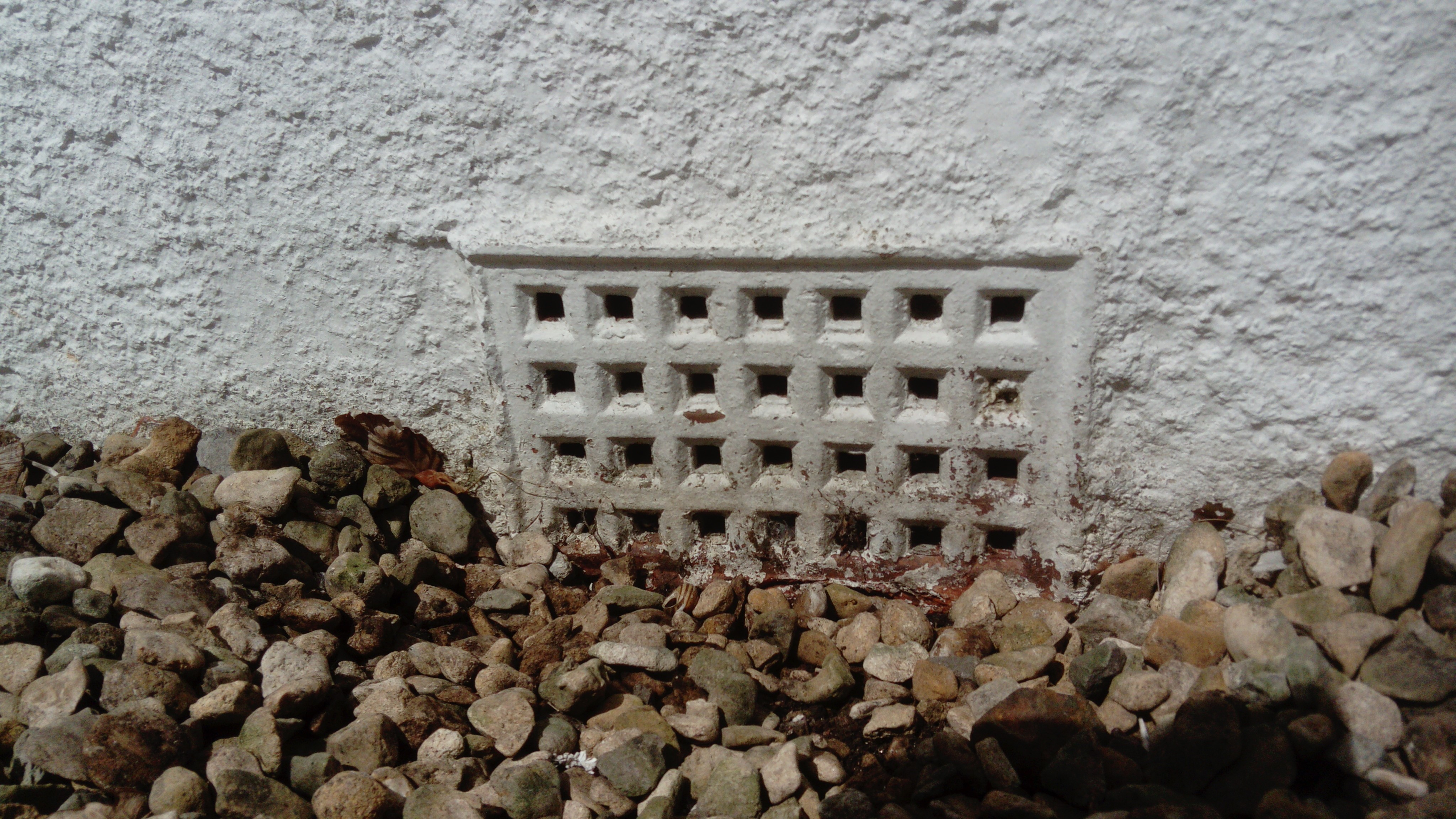 During the 1950’s and 1960’s, solid floors (of poured concrete) were common hence negating the need for airbrick ventilation. After this, suspended timber floors once again became popular. The accompanying airbricks consisted of plastic louvre-type vents with a slight slope to the fins.  This helped reduce penetrating dampness problems and restricted the opportunity for rodents to enter the sub floors. Again, these vents do require clearing out.

Even if the floors are of the block and beam construction common in the 1990’s and noughties, air vents are fitted to help ventilate the space. They can also form part of radon control measures so again should not be blocked or removed.

Sometimes larger square vents are seen on the front elevations of houses whichare above the internal floor level.  These are usually installed to help increase air flow for internal combustion appliances such as back boilers or gas fires – they should not be confused with airbricks that are normally brick sized, used to ventilate sub floors.

The insertion of a solar powered fan would greatly assist in ventilating buildings. This would be beneficial in reducing  the many problems associated with damp sub-floors over the last 150 years or so. Such fans are available in other countries but are not found in the UK. They are inexpensiveto produce and would offer significant savings on reactive maintenance as well as preventing decay in sub floors.

Our surveying practice has been operating round the Bristol area for over ten years so we do have a substantial track record.  We have been appearing in reviews by our clients on various websites since 2011. A building survey is an ‘occasional purchase’ and it is essential to choose someone who is trusted. All our reviews are genuine. We do appreciate that buying a house is a stressful time ! But we gently ask our clients to post a review if they are pleased with our services.

Where can you find us?

Click on the heading to read our our reviews

We set up our profile on FreeIndex in 2011. Here we are ranked 1st out of the  802 surveyors listed on it nationwide. We have  130 x 5* reviews and one 4* review.  The FreeIndex algorithm verifies that the reviews come from individual email addresses with separate ISPN numbers.It flags up and rejects any suspicious reviews.

Google was a harder review site to set up as the business needs to be found on GoogleMaps. We are a  ‘virtual business’ to minimise overhead costs for our clients! Hence we did not start asking for Google reviews until two years ago. We’ve already gained 18 x 5* reviews on the Google platform.

For a while,we used Yell and picked up 12 great reviews.  However as we no longer pay to advertise with them, our entry rarely pops up in searches.

Recently we have started asking for Facebook reviews and have seen some clients come direct from there. The reach of social media is growing. So it makes sense for us to share with you who we have worked for and how they rated us!

We came across this site called three best rated. Another independent site, they select the top three businesses in a locality, using 50 different indicators. They clearly do their homework as they rated us in their top three Surveyors in Bristol.

We refuse to “make up” reviews . We agreed that we are always wary of those “testimonial pages” where the reviews could have been written by the business. You never see a 4* amongst such collections published directly on a website.

Faked reviews have been a hot topic in the media as these give a false impression as to the quality of the service provided. Recently we looked at some of our competitors’ reviews on various sites.  One had amassed 35 reviews in a single week which we felt was unlikely to say the least; the site in question does not verify such posts.Take a look at the timeline of the reviews that have been left on a site and make up your own mind!

And if we work for you and you are not pleased with our services, tell us so we can remedy any issues. And you think we exceeded your expectations, we would be delighted if you were able to find a few moments in your hectic day to leave a review for us,too !