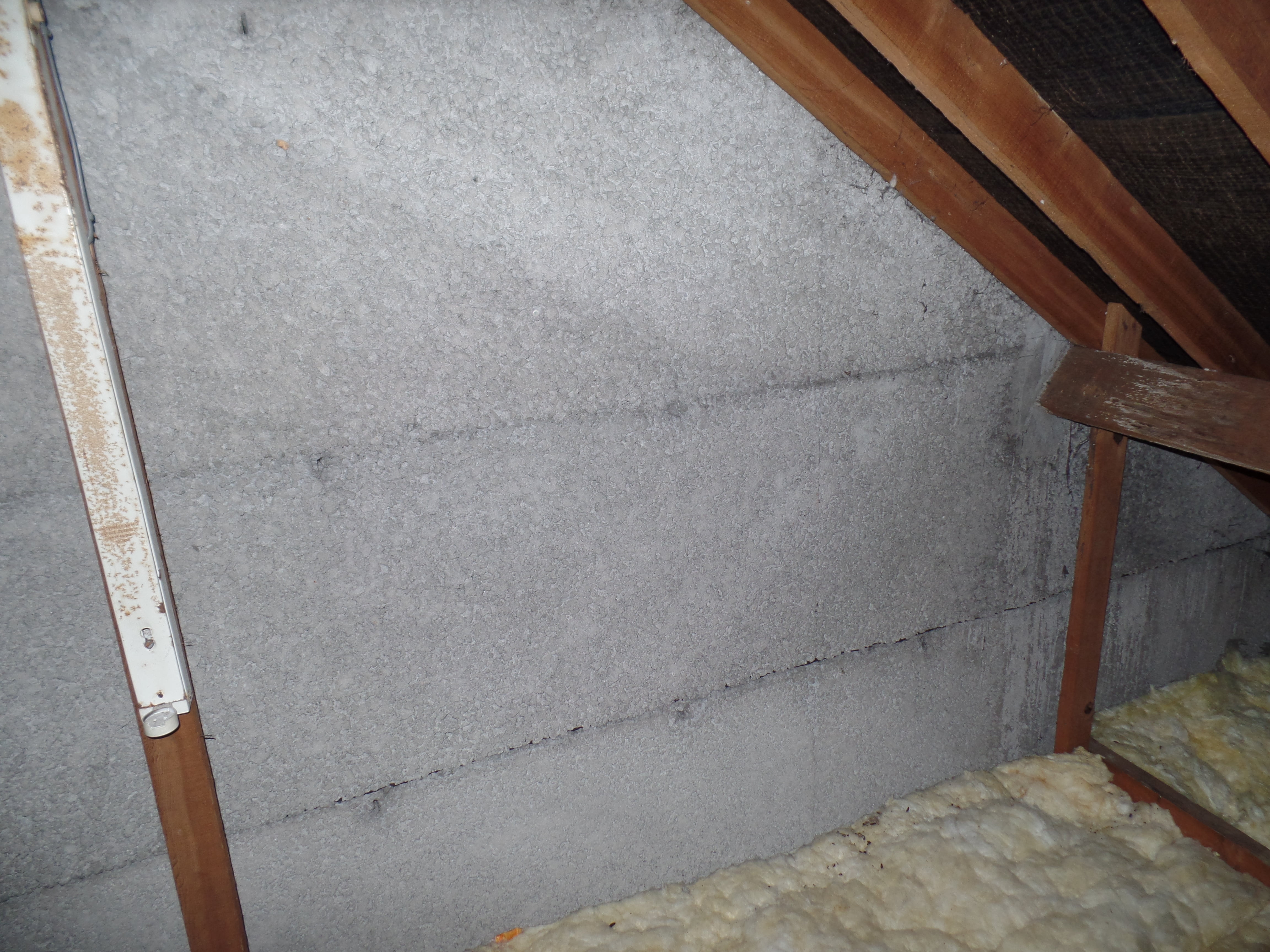 These were constructed by John Laing builders with the first house being built in 1919. They are a fairly common form of construction – they were built by Councils in large estates as they were fairly cheap and quick to build.

We have surveyed many Laing Easiforms in both Bristol and Gloucester. These dwellings can be identified by their tall slender chimney. The chimney tends to protrude from the central wall; however these chimneys often suffer from failure of the render and tend to crack. Laing Easiforms normally have a concrete porch roof above the front door. But the main way to confirm is by entering the loft space and looking at the party wall.This is not made of brick and block as in traditionally constructed houses, but is fairly smooth and grey in appearance.

How were they built?

Surveying these types of property can be a very satisfying experience as they were all constructed in a very similar way. A solid slab foundation was laid, then a mastic asphalt floor covering which acted as a damp proof course. After the floor was dry, metal shuttering was temporarily constructed and concrete was poured into this mould. This was strengthened with reinforcing bars. As these houses are not constructed from panels brought in from elsewhere, and the work is carried out on site, these are called in-situ. Once the concrete walls were in place, the shuttering was removed and the roof could be added. Normally a traditional cut-type roof was used with some bolted trusses to add strength, for instance those found in Brentry. A flat thick roof comprising a concrete slab was sometimes used, such as in Lockleaze.

What are the associated problems?

Laing Easiforms were not considered to be defective under the Housing Act and as a result can be mortgageable. Hence they are one of the few types of non traditional construction where a mortgage may be obtained! But With every rule there are the exceptions and the most common is the pre 1940’s Laing Easiform. Their construction had thinner walls, with 3” of poured in-situ concrete,  a 2” cavity and then a 3” inner skin – which is very thin by any standard. Some of these are still present in Lockleaze in Bristol and these are seldom mortgageable. The post-war properties were of  thicker walled construction, with  3 ½ ” concrete, a 2” cavity and a 3 ½” inner wall,  such as many of those found in Bishopsworth.

The other commonly occurring problem is the quantity of asbestos that is often used in the construction.For example, the soffits were originally of asbestos cement boarding, which has often been hidden by new UPVC. The loft hatches were again asbestos boarding, as were the under stairs cupboards. Many of the ducts and boxings-in were also cement type board and thermoplastic tiles were often used to finish the floor.

Internal walls divide the living space into rooms.  They also give strength and structure to the property. Imagine putting a heavy weight on the top of a very large box – it would normally collapse. If you sub divide the box into four smaller areas and put a load on the top, it is likely to bear a lot more weight before it collapses. Houses are very similar. Large open plan spaces in buildings are often a key selling feature. Unfortunately many such open plan areas were originally sub divided, with internal walls supporting the structure above. If adequate replacement supports have been provided, fine. If not, what is most attractive can also be most costly to rectify.

Have you seen builders tapping walls? This is for two reasons – one to see if surface plaster has blown, the other is to determine if walls are solid or stud. A dull thudding sound often suggests a solid partition. These can be made from lightweight blocks or of old timber frames loosely infilled with bricks. When viewing an older property, look for cracks which could signify movement. If the partition wall is leaning, this may suggest something has moved or bowed over time,  usually the floors above or below.

These consist of timber frames which are covered both sides with either plasterboard or lath & plaster,  depending on the age of the partition. Contrary to popular belief, stud walls can become load bearing over time – when buildings settle, weight loading can be transferred onto the timber studs. If the building is timber framed in its construction, they certainly can be load bearing! They may be designed to be structural.

After the war experimental partitions of various types were used.  Usually this occurred in system build and council houses but some types  have been revived in more modern properties. These can sometimes be identified because their thickness is less than 110mm, sometimes as thin as 50mm.

After the war, Paramount partitions were common in Bristol and in PRC (PreCast Reinforced Concrete) houses. The construction was a plasterboard sandwich with cardboard infill for strength -imagine an eggcartontype of configuration.

Stramit was another interesting one. This time, compacted straw was sandwiched between plasterboard.  These were more common in Gloucestershire. They can be very problematic if leaks happen; we have seen plants growing from internal walls as the result of a leak!

Another system we have seen in Gloucestershire, most recently in a bungalow in Coal Pit Heath, is the “clay pot” or extruded clay brick. These are similar to blocks seen on the Continent and were  mainly used in the 1930’s and 1950’s. However, you are unlikely to be able to identify these on a viewing.

This is a very quick and easy way to disguise poor plaster or dampness. It is literally gluing a plaster board onto a wall or nailing it onto timber battens again attached to a wall. Where dry lining is present, normally as the inner face of external walls, be wary!  Our YouTube video shows the problem, diagnosed by using thermal imaging.  If a hollow sound is heard when you tap the inside of an external wall, be suspicious.

In our first section about viewing a property, we suggested looking at the floor plans of similar properties nearby.  Trawl the estate agents’ websites!  These can give you an indication of the original layout of the house you are considering. Have walls been removed? If so, they should have been inspected in advance by a competent person (a structural engineer or surveyor) to check whether they are load bearing, structural. Ask the vendor if they removed the wall or whether there is any documentation to support the removal of the wall.

If the wall was load-bearing, supports should have been put in place to carry the weight of the structure above. Sometimes smaller nub walls are left to support steel lintels or there are boxed -in downstand beams. Keep an eye out for these – if they don’t exist, you may need to insert them later. Look for any signs of stress along the line where the partition was located, or where the beam is built into the wall. Cracks or failing plaster would be probable indicators.