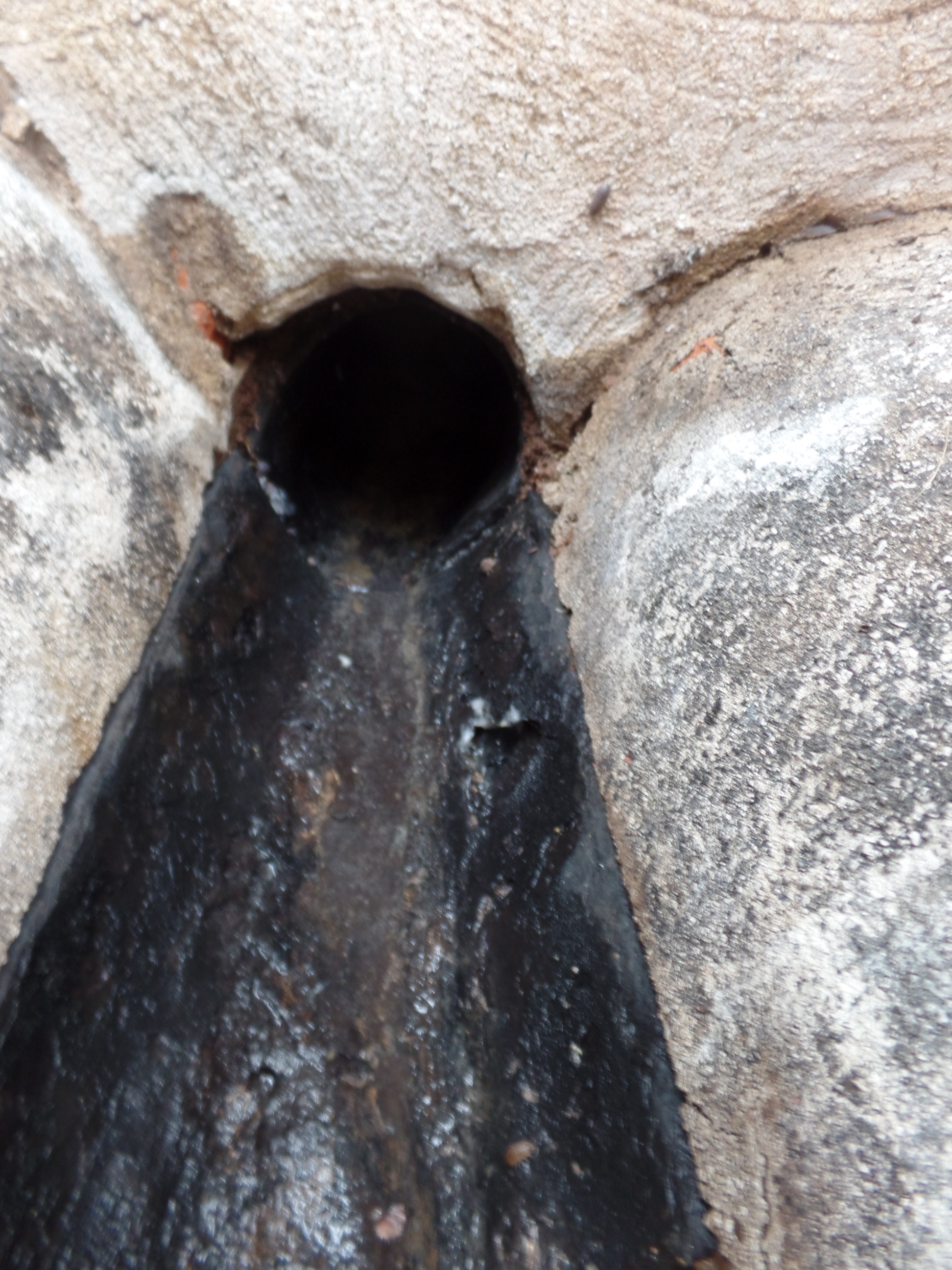 We only undertake full structural building surveys hence we lift inspection chambers to inspect the drains beneath.Unless there is a very good reason not to! Such as cars parked over chambers, rusting or dangerous chambers or where they have been covered by decking or tarmac. This inspection is normally undertaken as the last part of the survey. But when we see the tell-tale black pitched fibre tubes in the inspection chamber, we know you have a problem.

What is Pitch fibre?

Pitch fibre is an organic base (such as cellulose/wood) formed into a tube, which is impregnated with bitumen.Imagine cardboard soaked in tar…Some were even reinforced with asbestos fibres to help improve their performance, which adds another layer of complexity to their removal.

They were jointed with a very basic slip-type collar which often fails, then root penetration becomes a real problem.Because of their delicate construction, flailing and rodding to remove roots and blockages will cause irreparable damage. It will scrape the bitumen away and accelerate their degradation.

When was it used?

We are on high alert for this in properties constructed between the 1950s-1970s, and commonly from the Sixties onward.

Pitch fibre drains were used mainly because they were so cheap to produce. However, the adage of “buy cheap, buy twice” rings true. Victorian properties often have perfectly serviceable drains over 100 years old, but these pitch fibre ones represent trouble.

With the design life being around 40 years, most of these systems are now time served and require replacement.Often vendors are aware of the presence of pitch fibre, as they have had issues with them during their occupation.

What are the problems with pitch fibre?

Pitch fibre by its own description doesn’t sound like a good idea for waste pipework.It has an estimated lifespan of around 40 years before the layers peel.The pipes become easily deformed due to pressure in the sub soil. Where the water regularly travels, the bottoms will blister. They are also prone to root penetration where roots can push through the joints or straight through the pipework itself.They can also react badly to certain fats and oils.

Insurance companies often specifically exclude damage to pitch fibre drains and do not cover the repair work. There have been rulings by the FCA with regards to these exclusions, but each is on a case by case basis and depends on the policy wording

Where have we found it?

We have found these systems in Clevedon, Yate, Ubley and Hanham for example.

What can be done?

We always endeavour not to recommend appointing specialists unless really essential- this is one such case. A CCTV survey will be required and this will answer most questions. As the pipes were fairly flexible and poorly bedded, the falls have often changed with settlement over the years. Hence lining them may not be an option. However, if the results of the CCTV inspections results show that the falls are fair, then lining is one repair method. Otherwise, the word that is not used as much anymore is“excavation”. The cost of this really depends on the depth of the drains. In Yate and in Clevedon they were very close to the surface whereas in Ubley they were very deep.