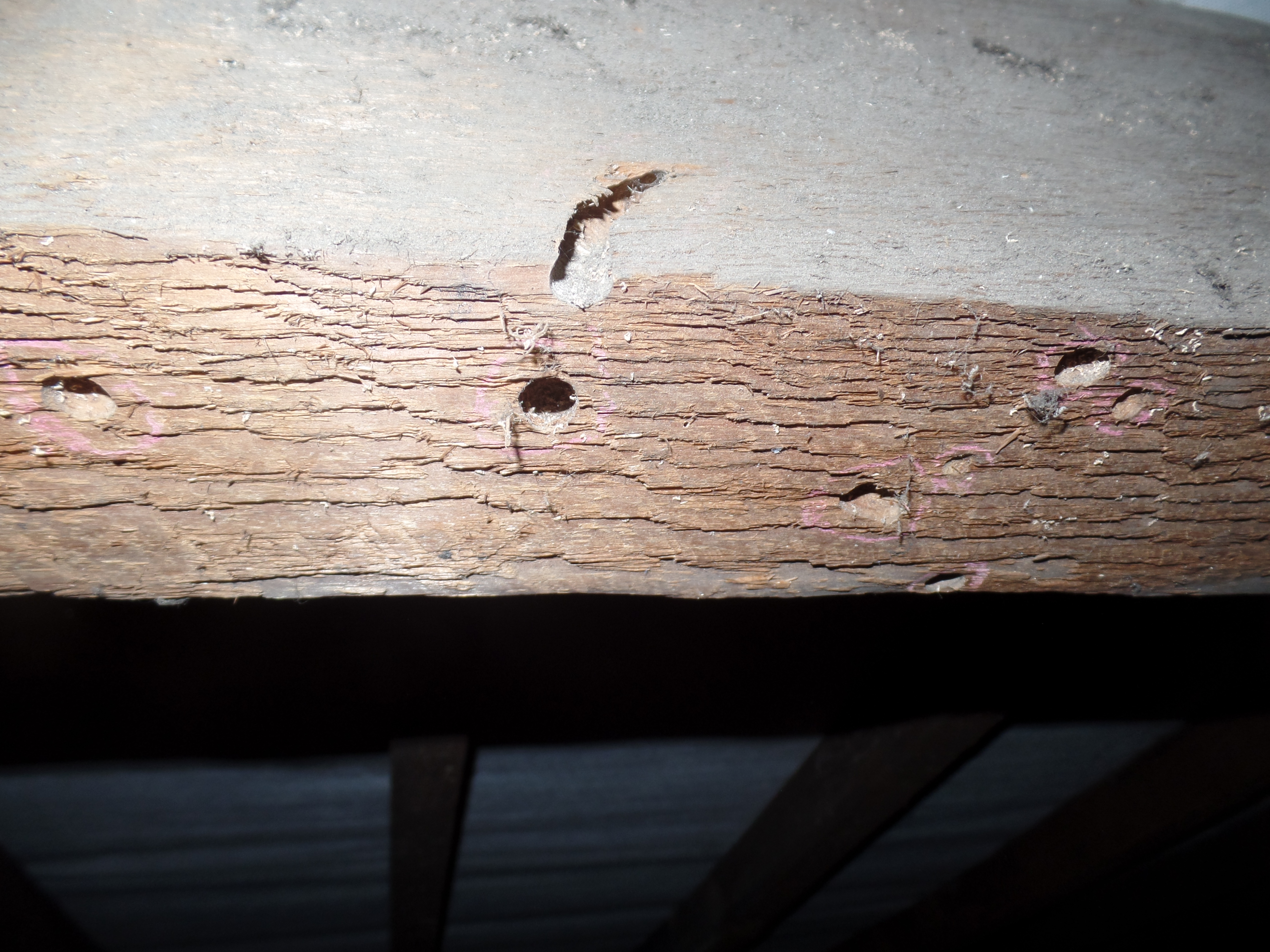 Being based in Bristol, the longhorn beetle or Hylotrupesbajulus isn’t something we automatically look for.  It is rarely found outside Surrey and the surrounding areas, with some localised outbreaks in London.We have worked in these areas in the past for specific repeat clients – again this emphasises the importance of a surveyor who understands local issues and the building vernacular.

The Longhorn beetle is thought to have been bought into the UK at the time of the Second World War, in imported timber. It feeds on the softer parts in softwood so there are some similarities to our own common furniture beetle. Except for the scale of damage,which is monstrous!

As we operate in Bristol, we were amazed to find a series of holes in a purlin that were 10mm in width, in a house in St George.  Yes,  1 cm in width!  At first it appeared that the purlin had been randomly drilled. But on closer inspection we could see a curve to one of the cross cuts. This type of curve would not be possible with a drill bit, hence we had to conclude it was organic in origin. You should be aware of the scale of this damage – the purlin in the image is 3” across!

WHAT WAS THE CAUSE?

Being surveyors,we encounter many specialists who have a wealth of knowledge. We are very lucky to know a former director of a leading timber and damp company who has since retired.  A great loss of knowledge to the industry! We sought his advice as this was something very extraordinary. We had researched  the files of the BRE (Building Research Establishment) which show a comprehensive map of sightings. Our specialist friend  looked at the pictures and confirmed our first suspicions:  the holes appeared to be bored by a “ Longhorn beetle”.

We had checked the cuts and age of the holes, with a lack of frass apparent. The holes were not visible in any other timbers in the loft space. Hencewe concluded the damage was historic. It was likely that the timber had been imported with the insect inside or it was present prior to cutting the timber in the 1940’s.

The beetle is so rare that had we passed the problem to a specialist contractor, the matter might have rapidly escalated. It could have become very expensive for both our client and the vendor, with the inevitable caveats and other “insurances” being required and treatments that may not be necessary or appropriate being specified.

Having the help of someone like our friendin accurately identifying the problem was invaluable. This insect causes so much damage there is a need to regularly monitor the rooftimbers for signs of further infestation. It is believed that its life cycle can extend to 10 years. At least our client was forewarned!

Despite this outbreak being a single example, the longhorn beetle is present in a number of areas.  It has been  suggested that this is to do with the climate of these localised areas. This raises the question of what will climate change do to the spread of this most destructive of insects?

Rats and MiceHow long does a roof last ??
Scroll to top