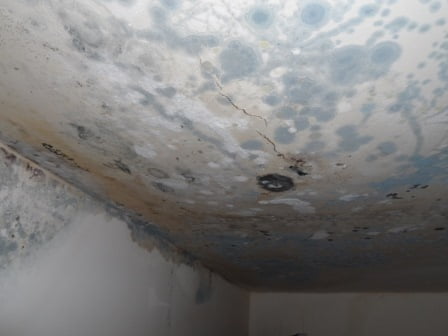 Ceilings are made from a variety of materials and each has different associated problems!

Did you read our blog on inspecting lofts and venture into the loft space (wearing a PP3 mask)? If so, you might be able to lift the insulation and see the type of ceiling material below.

While working for many leading insurance companies, we have inspected countless collapsed lath& plaster type ceilings.Lath & plaster can and will eventually fail. It happens in the most expensive houses which have decorative cornices that run into thousands of pounds to replace in a single room. It also happens in pre 1930 council houses.  Famously, the ceiling collapse at the Apollo Theatre in London in 2013 injured over 70 people. Such ceilings are seldom used now except in restoration work in listed buildings.

These ceilings are very thick,  normally around 20mm. The tell-tale signs of failure are cracking, an undulating surface and sagging. Finishes such as lining paper tend to mask such cracks but the undulations are easy to see.   Sagging suggests that the plaster has detached from the wooden laths above.  The cracking is not inregular, straight lines -it is normally diagonal and irregular.

Removing such ceilings is a very dirty job!  And it is a real challenge to save any ornate cornices running around the perimeter of the room. This dusty job is often expensive as few want to undertake this work.

Sometimes you can deal with lath & plaster ceilings by underboarding them. Underboarding is screwing a layer of plasterboard beneath the lath & plaster to support it. This is an inexpensive repair but will lower the ceiling height and you will lose any cornicing.

Occasionally in the 1950’s and 60’s, ceilings were constructed from thin sheets of hardboard, ie reconstituted timber. It is normally fairly easy to spot these from underneath, as they have tape over the joints of the boards. This gives the ceiling a grid like type of pattern!

Since the 1940’s, ceilings have been constructed of uniform boards of gypsum known as plasterboard. These boards have a long service life.In the early days, when plasterboard was first used, the joints were not taped with a netting scrim. Hence minor thermal movements and stress cause straight line cracking, sometimes at right angles.  When this is the case, the joints can be taped  over and the ceiling skimmed. Sometimes nail pops are evident. As long as these are repaired properly (not just covered in filler) they are unlikely to re-appear.

These were most popular in the 1970’s. They were often used to disguise cracking or damaged ceilings. However, they are a fire hazard as they were not intumescent .  If they catch fire, they can rain molten polystyrene,  a scary image! These should be removed as soon as practicable. While removing the tiles is fairly easy, the plaster beneath will probably be damaged as a result. The spots of glue are also very hard to remove. So allow costs for the skimming often required after removal.

Timber cladding was another old favourite. These are strips of tongue-and-groove wood and hence are flammable. So they can pose a risk, especially if they are used in a Kitchen. The cladding is not fixed direct to the ceiling; it is often nailed to timber battens which are screwed through the ceiling.  Removing  these will disrupting the finish beneath. Hence you should only undertake this if you are willing to plasterboard and skim the ceiling beneath.

Artex has been used since the 1970’s, an applied finish with various patterns from stipple to swirl. It was sometimes used on plasterboard instead of a skim, so the characteristic straight line cracks, often with right angles, are very common. Patching Artex satisfactorily  is very difficult and the repairs always seem to be obvious.  Hence when a section is damaged, it is often better to simply skim over the entire ceiling.  However, Artex applied prior to 2000 can sometimes contain traces of asbestos so scraping off the more pointy bits can be hazardous. If such ceilings appear damaged, then it is always best to have tested  it prior to purchase, because  removal of a medium size asbestos-containing ceiling costs around £800.00. And you will still have to replace the ceiling!